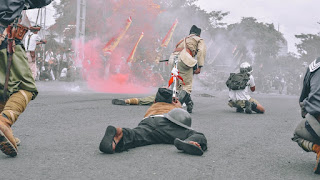 It was the eve of my father’s 50th birthday and I had just pulled out the pan that held the large love-shaped chocolate cake from the oven. I smiled, taking in the delicious aroma that tempted me to break off a large chunk. Even though we had no money for a large celebration, I wanted this to be special and memorable. As I got ready to commence icing, my dream of becoming the best caterer in the world silently nudged at my heart

“What’s that?” I asked him,
a bewildered look on my face. My mother stepped into the kitchen, her face calm and composed. With her stick, she navigated her way to a small stool resting against the wall.

“What’s going on?” She asked, her voice soft and almost inaudible.

My brother shrugged. He ran out swiftly and I followed behind.

Then I remembered my mother and returned to the kitchen. She was still sitting on the small stool staring into the darkness that her blindness had created. I pulled her hand. She withdrew it sharply.

The sound was getting closer. My mother remained at the same position.

“Go.” She stated, frowning and adjusting her wrapper around her chest.

“I can’t leave without you.” Now I could hear heavy footsteps.

“This is my chance to leave this wicked world Jummai. I’m not useful anymore.”

I could feel my mother’s pain. She had been an agile woman known in the community for spearheading the market women’s association with a splendid ruthlessness until the cataract rendered her eyes useless.

“At least, you can’t just sit here and allow them kill you. “

The door flew opened the moment I jumped out of the kitchen window. Writhing in pain, I crawled to a small hole my brother had driven through the wall and wringed my body through it. Where on earth was Haruna? I could hear people screaming as my feet landed on the other side of the fence. I stood quickly and looked around the farm for a place to hide. The screaming came again. Rapid gunfire.

I began to run down the farm blindly, looking for a spot where I could hole up. Suddenly I heard voices behind me. I stopped and turned. A man was leading some frightened looking people towards the opposite direction. I ran after them. If I was to die, I would rather do so in company.

As we approached a wide tarred road, I saw armed uniformed men gunning down women like they were animals in a forest. They sighted us from afar and began to chase us. I saw the head of an adolescent girl in front of me disappear. Her blood splash all over me and my vision became blurry. So I wiped the blood off my face in the same way I did every morning when I poured cold clean water from the clay pot to my sleepy face.

A bullet dropped beside me. Another landed in front of me. It seems someone had chosen me as a target for the kill. I saw a large gate ahead and people running in. Somehow I felt an assurance that if only I could reach that gate, I would be safe.

Someone stumbled against me from behind. I fell, my head hitting the hard ground. But I was up again, running at the same speed as my heart beat and ignoring the hard throbs in my head.

Suddenly, the gunshots stopped. I heard a loud voice over a speaker instructing people to return back because the soldiers had agreed to retreat. I saw mass of heads turning away from the magnificent gate. Some sat on the stony ground, exhausted. I stopped too, watching the men put away their guns and families reconnect with their loved ones. The tensed atmosphere had given way to a cheerful one. Soon the open space was emptied, leaving just few of us, undecided about the next step to take.

About twenty of the uniformed men began to approach us and I noticed one dark unattractive man strolling towards me and smiling. I turned towards the gate again, my heart panting heavily. Then I made a break for the gate.

“Stop there or I shoot you!” a hoarse voice said behind me.

I didn’t stop running. It was then I heard the gunshots again. Then clangs of heavy boots. They were chasing me. Tears streamed down my face as I saw the gate right before me.

My right shoulder went hot and I felt a sharp pain. I knew I had been shot. I increased my pace. Some armed men standing right in front of the gate cheered me on and so with my left hand and the little strength left, I pushed the gate opened and fell into strong arms.

A woman in a white overall began to dress the wound on my shoulder and some strange faces grinned at me, uttering words that I couldn’t understand. I turned my face towards the opened gate and saw them-thousands of armed soldiers- few miles away from the gate, dressed in black uniforms, aiming their guns at the gate. I was wondering why they couldn’t just invade us and overthrow the few soldiers that paraded the entrance. A man stooped down in front of me, smiling.

Daddy, I muttered weakly before my eyes went shut.

When I woke up again, it was dark. I wasn’t sure where I was. I jumped to my feet, trying desperately with my hands to figure out where I was. Finally I found a switch. The light came on.

For a moment, I felt a chill run down my spine as I realized how far from God I had gone. I sat with hands covering my teary face that day and asked Jesus into my life again. I hurriedly turned in my stuffs into my small travelling bag and headed for the door.

As I walked out of the building that early morning, I remembered my father’s words. “Jummai, the day you surrendered your life to Christ, a war was declared over you in the camp of the devil. He’s going to do everything in his power to get you back.”

***********
The grace to stay away from sin has been provided for us through Jesus Christ. Let’s ask for that grace today. Don’t fall victim of that declared war.