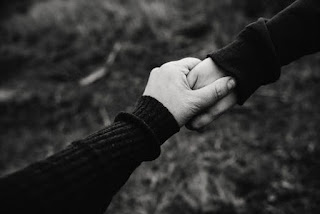 Tayo and Felix have been dating for almost two years now. Whenever Tayo pleads with her boyfriend to take steps by making the relationship formal, Felix always gives the excuse that his salary is not sufficient to give her a comfortable life.

Tayo is madly in love with him and expresses her heart felt devotion by giving her body to him three times a week, cooking his meals every weekend and washing his dirty clothes two thursdays in a month.

Prior to their two years dating anniversary, Tayo’s sister, Ope, invites Tayo to a christian gathering where she even offers to help in the ushering team steaming from her experience as the assistant head of the ushering team in her local church. It was at that meeting that Tayo encounters God and discovers that if she continues in her way, she would end up eternally damned. She surrenders her life to God, determined to stay clear of her old ways.

She returns home to break the news to Felix. He is upset and flares up. He cups Tayo’s face in his hands and tells her he would never be the same again if she leaves him.

Tayo is confused. She decides that she would continue with the relationship but no sexual intimacy would be involved. But in six months, Tayo has had sex ten times and each time it happened, she feels weighed down by guilt, repents and promises God never to get involved again. Yet she finds herself back in bed with Felix who doesn’t understand Tayo’s sad countenance at the end of every sexual activity. As far as he is concerned, he is having fun.

The flesh is like a leech that sucks desperately at a man’s sore and no matter how much he tries to shake it off, it will stay firm until that man forcefully pulls it away. Paul in his admonition to the Galatians states clearly a basic principle that keeps a man continuously free from the works of the flesh. In his words;

But when it pleased God, who separated me from my mother’s womb, and called me by His grace, to reveal His Son in me… immediately I conferred not with flesh and blood…

A call comes the moment our eyes become open to the truth and we accept and receive Christ in the light of God’s word. Then as God begins to reveal His Son, who is referred to as the Word, there is one big trap we must deliberately run away from-Conferring with flesh.

I do not hold a B.A in English but many thanks to the dictionary, my eyes have been enlightened on the word ‘Confer’. To confer means to deliberate, to discuss, to consult, to talk together with something. This is how it works.

FLESH: How can a man stay put without having sex with his fiancée, that’s impossible!

YOU: It hurts God when I tell lies. I’ll have to write the exact time I came to work.

FLESH: Are you mad? You are going to be fired.

YOU: There’s still a bottle of alcohol under my bed. I must throw it away now.

FLESH: Why are you so obnoxious? It’s just a bottle for crying out loud. After all taking a sip daily isn’t exactly a sin.

TAYO: God said I must sever completely my relationship with Felix. Apart from the fact the relationship is pulling back into my old ways, I’m also disobeying God’s law by becoming unequally yoked with a man who has no regard for God.

FLESH: Do you think you can ever find a man who will love you like Felix? Manage him jare. You can change him if you keep praying for him. After all, the sexual intimacy has greatly reduced. Give yourself a break and stop being hard on you. God is not that difficult. If He should count iniquities, who can stand?

The worst mistake any Christian can make is to deliberate or discuss with the flesh. Remember, the flesh will always displease God. It will always delight in breaking God’s law. The more time you spend rehearsing in your mind whether or not to take that quick decision, the firmer your hold on the flesh will be.

What is that thing that’s constantly drawing you back into a sinful lifestyle? Sit back and think deeply.

Write out the decisions you are taking to bring an end to that grip.

Ask for Grace to follow through with those decisions. Remember you can’t actualize any of this without the help of the Holy Spirit.

N:B- Have you sincerely surrendered your life to Christ? Even if you desire a release from that grip, you will never be able to, until you accept Christ into your life.