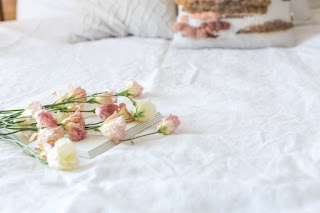 He approached me slowly, I moved backwards. He stopped. I stopped. Our eyes locked. Then he shook his head, climbed the bed and faced the wall. I tiptoed to the bed, grabbed the duvet and spread it on the floor. That has been my spot since we returned from our honeymoon four days ago. I reached for a pillow and placed it between my knees. My eyes were heavy. I forced them open. Gradually I gave in.

I saw him. This time his face was hidden behind a mask. He pushed me to the wall and began to fumble with my night gown.

“Leave me alone!” I screamed.

I sat up, panting heavily. Beads of sweat covered my nape even though the air-condition was turned on. It was no surprise that I was back on the bed, many thanks to Femi who carried me when I was fast asleep. Now he is gaping at me. I knew he wanted explanations but I had none to give. I swung down from the bed and went to the kitchen. In a minute, I had his breakfast of bread and fried eggs laid out on the tray. My hands were trembling as I poured hot water into the flask.

I turned. Femi was standing at the door dressed in a grey suit. A frown creased his forehead.

“I just made breakfast.”

He walked away. I pushed the flask aside and placed my head on the table. I wept. Barely two weeks into our marriage and we were strangers in our own home.

I am going to change, I said as I wiped the surface of the kitchen table with a napkin but my resolve depleted when two days later, I and my husband sat before my father in his plush office.

“How could you take our issues out of the bedroom? How?” I shouted, the moment we returned home.

“Cynthia, it’s been two weeks since we got married. You won’t even allow me touch you and you keep screaming every night. What was I supposed to do?”

“I see, you want sex right.” I barked. “Fine, Go ahead.” I stood in front of him. “After all, that’s all you guys want.” Femi marched into the room.

Throughout that day we didn’t talk to each other. And the next day also. On the third day of our silence, I was lying down on the bed reading Francine Rivers, ‘As the shofar blew’ when my phone rang.
The number may have been strange but the voice was familiar.

“Cynthia.” her voice was trembling. She was also speaking in whispers. “I need some toiletries and underwears. I forgot to pick them when I left the house.”

“Where are you?” I asked, puzzled.

“Take down this address and don’t tell anybody.”

I scribbled down the address quickly. “I’ll be there soon.”

I slide my feet into my shoes quickly and picked up my bag.

The door opened. Femi rushed in.

“Your father just called. Your mother is missing.”

I rushed out of the house, flagged a taxi and handed him the paper containing the address as he drove off.

Lola, my mother’s old school mate was assisting the nurse to dress my mother’s wounds when I entered the uncompleted bungalow that stood alone on a lonely street. My eyes followed the marks that decorated her back and I remembered her various trips to the torture room. I remembered her screams, her pleas as my father used different instruments to inflict injuries all over her body. How can I forget her swollen cheeks and blood covered nose or the days she had to stay away from church

Then It was my turn. Dad would smile as I walked into the torture chambers-an empty room with dark drapes- tears running down my eyes, and saying, ‘Daddy, please’. He would pull off his clothes and order me to do same. Then he would beckon me, push me to the sparkling marbled floor and make his entrance. I always screamed. I was just seven but I remember the incidents like it happened yesterday. Gradually I got used to the various visits to the chamber and my screams turned to muffled Cries. Mum warned me never to talk. We have a reputation to protect, she says. When she is asked why she’d missed services, she had her pre-set answer ‘I was away on a ministerial assignment.

“I’m getting a lawyer. This cannot continue.” Lola said.

Mum sat up. “You will do no such thing!”
I glared at my mother in silence.

Mum shook her head stubbornly. “Guess what the headline on the front page of Daily Trust will look like. ‘Reverend Mrs Ajayi’s confesses to domestic violence’. I am the president of the Women’s Fellowship. I tell them I’m married to the best man in the world. For goodness sake, they look up to me. I’ve mentored many of those young girls. I’ll rather die than ruin my reputation. ”

I was furious as I climbed the stairs that led to my flat. if I could just drive a knife through his neck, I’ll be satisfied. I wished I could see my father suffer for what he did to us. Femi was staring at a blank TV when I entered. I didn’t even say a word to him as I walked pass him to the bedroom.Two hours later, I entered the living room to find Femi on his knees, a Bible opened in front of him.

My father showed up with three of the elders the following evening. We were in the living room. Somehow I felt the air tense.

“When was the last time you spoke to your mother?” The question was directed at me.

I kept my face down. For eighteen years, I have never looked my father in his eyes, not even when he showered me with gifts and money after the regular visits to the torture room. Femi gazed at me in amazement.

“Did you hear what I said?” My father narrowed his eyes at me.

“Please can I have a moment with my daughter.”

My eyes widened. I grabbed my husband’s hand as he made to stand up. “Please don’t leave me with him.” I whispered. Femi’s eyes searched mine. “Please” I knew this was difficult because my father was his spiritual mentor. He sat back just as the elders stepped out.

“I’m staying here with her.”

My father shot an angry glance at Femi. “I said I want to talk to my daughter alone.”

I held his hand tight. He glanced at me again. My father’s eyes darted from me to my husband. He stood up and left the house. For some minutes, we sat there in silence.

“Do you think this marriage is a mistake?”

He sighed. “I remember our courting days. We used to laugh, talk and pray together. Everytime we were together, I thanked God that I had you. You had a way of reaching out to my soul and an inner strength that amazed me. But it all seems like a mirage.”

The words jarred at my heart.

“Cynthia, are you having an affair?”

I stared in bewilderment. “No! I can’t believe you think that way about me.” I stood up, furious. “Femi why will you say something like that?”

Femi glanced at me as if to say, ‘you see what I’m saying’. I reached for my phone. It was my mother making her demands as usual.

“Every time I inquire about the caller, you just shake your head and walk away. How do you want me to believe there is nothing fishy?”
I didn’t respond as I searched for the car keys. I found it on a stool beside the sofa. “I want you to take me someplace.”

He looked at me puzzled.

Femi was astounded as he sat in front of a woman whose arms were splotched with scars and injuries and large bags settled under her eyes. She was narrating the gruesome story of the torture chamber. When she finished, I narrated my own version. Femi became very upset. He didn’t like that I had kept it away from him. I knelt down and begged for mercy. He stared blankly at the wall as I tugged at his feet. Mum made to join me in my kneeling position but he stopped her. He pulled me up and set me on his laps. That day, I watched mum’s eyes glow as she narrated Dad’s loving and warm nature before that trip to the Pastor’s conference.

“What could have happened at the conference?” My husband asked.

Mum shook her head. “Femi, I wish I could answer that question. All I know is that nothing remained the same after that day.”

That night, I didn’t sleep on the floor. I sat beside Femi on the bed, his hands wrapped round my waist and my head on his shoulders. “Cynthia, I love you with every breath of my life. I’ll do everything in my power to protect you.”

I nodded, my head now on his chest. “You know, I used to have a strong relationship with God, but I don’t know where I deviated. I just got angry with myself and with God. I’ve missed Him.” Tears ran down my face.

Femi caressed my hair softly as I whispered silent prayers to God. “Do you know we’ve not had devotion since we moved in together? It’s unbelievable.” He drew me closer and whispered in my ears. “That’s never going to happen again.”

For the first time in my life I felt safe. I didn’t have any nightmare that night.

One morning, Femi travelled to Abeokuta with some of the church workers. A new branch was to be established there and since Femi headed the evangelism department, he had to oversee the work. I had just finished sending out mails that had attachments of my business proposals when I heard a knock on the front door. I glanced at the time. Femi couldn’t be back so soon and besides, he had his key. I hastened to the door, the key in my palm.

No response. I stood back and waited.

“Who is there?” I repeated.

“Will you open this door now.”

I froze. The voice was unmistakable. It was my father.