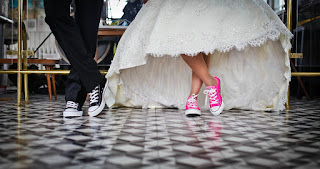 I ran inside. The pounds on the door increased. My heart beat raced. My hands trembled as I dialed a number.

“He is here.” I whispered, my voice shaky.

My eyes glistened with tears. “Femi help me. Don’t let him hurt me again.”

“What are you talking about? Your father is in our house?”

“Stay right where you are. I’ll call Segun and his wife to come over.”

I crouched behind the sofa and waited. I could hear my father’s voice from behind the door. He is saying he just wants a little chat with me. But I know him. I have learnt not to take him for his word. When he swore never to touch me if I attended lectures from home, I believed him yet I haven’t been able to erase the four years of pain and anguish as an Economics student. I remembered the night he insisted I disclose details of my NYSC mobilization number, so he could work to Lagos, I had bluntly refused. He’d left my mother half dead the following day. Mum was everything to me and so I had given him the number. I served my father land from my father’s house.

I jumped to my feet and skidded to a stop at the door.
Silence.

I heard Segun’s voice. Mary was telling Segun to knock harder. I opened the door quietly. The couple were beaming with smiles. My father was nowhere to be found.

Femi returned that evening and as we sat on the sofa of soft brown leather, he wrapped his hands round my waist and nibbled my ears playfully.

I laughed and faced him. “You want to take me to bed?” I said softly.

He looked into my eyes and whispered. “I want you badly Funmi and right now I feel like carrying you straight into the bedroom but I won’t. You think I don’t know this is your way of saying, ‘Thank you for protecting me from my father?” My eyebrow arched. How did he know?

He held my hands. “Sex is meant to be enjoyed. It’s not a favour. Sweetheart, I don’t ever want to remind you of your father. I want you to know what love truly means.” I sighed deeply and rested my head on his shoulder.

He raised my head and grinned. He kissed me. “I pray for you everyday. You are going to heal and I’ll be here through this healing process.”

I wept. I couldn’t explain exactly why the tears were flowing continuously. The new feeling of excitement bewildered me. Somehow I wished Femi could just take me to bed so I could return the favour- that was my familiar ground. In the weeks that followed, Femi took me out severally for dinners, read poems he’s written for me, laid beside me and spoke softly to me. Every day, we read the Bible together and sometimes we just gaze into each other’s eyes and enjoyed the silence.

One rainy evening, we made love but he withdrew when I stiffened. I saw his eyes boring into mine and I knew he could read fear. I was worried. That day, I knelt at the center of the guestroom. I begged God to take away the pain and fear that had been built in me those eighteen years. I wanted to release myself fully to the man who has shown me what love truly means.

I stood up. The chilly air coming from the window, an aftermath of a heavy rainfall, gave me an answer.

“I am ready.” I uttered excitedly and rushed into the room. My husband was fast asleep.

I was awake very early the next morning, all eager and set. Femi sat up, puzzled at the glow on my face. Thank goodness it was a Saturday. Once we finished our morning prayers, I would take over.

It was Nurse Sarah. The honey skinned woman with small eyes, who had nurtured mum back to health. My face went white when she informed me about the frenzy state of my mother because the Reverend-my father- had discovered her safe haven.

I have never seen Femi drive so madly before. Even then I wished he could drive faster.

Nurse Sarah was at the door when we entered the house. She sighed in relief and hugged me. Her demeanor has always catch my fancy. Her eyes were gentle, knowing and somehow warm.

Nurse Sarah pointed to the direction of the bathroom. I rushed there to find my mother standing behind the door. She was weeping profusely. I led her out and settled her on the bed. But she would not sit still. Every now and then, she peeped through the curtain and it made my heart flutter.

If he dared touched her, I will kill him. How did he get her new number? I thought just as Nurse Sarah walked out of the house to get my mother’s medications.

Femi pointed to my bag. I rummaged my bag for the phone. I stared at it for some seconds.

“Hello, Aunty, something has happened to Papa o! ” The voice was familiar. it was David, the gardener.

Femi stood up. My mother didn’t move. “I don’t believe him. it’s a trap to lure me out of this place.”

I stood before my mother. “Mum, he might know about our presence here and he may be doing this to get us out of his way. Please come with us. Three against one.

Her eyes roamed around the room as she collected her thoughts. She got up quickly and followed us out. When I turned back to gaze at my mother, I saw a woman, tired and worn out.

“I don’t care anymore. We are taking this up with a lawyer.’ I said as she entered the car.

I noticed she didn’t respond or take a defensive stand as usual.

We found dad dead in his grey Pathfinder. His head was bowed on the steering.

My mother slept for 10 hours afterwards.

I got the greatest shock of my life when some days later, as I tried to sort out my father’s stuff, I stumbled on two photographs at the bottom of a large sac that carried his study Bibles. My eyes widened. First from shock and then to anger. I shot a quick glance at mum. She was chatting boisterously with my husband. A plate of rice and vegetable stew sat in front of her.

This will kill her.

I stared at the picture again. My body blazed with fury.

Nurse Sarah was kissing my father right on his lips, her right hand on his chest. In the second photograph, she was sitting on his laps at the beach. I peered closely at the picture. Dad was dressed in a dark T-shirt that mum had gotten for him on his birthday.

“Oh my God! That was the last birthday we ever celebrated.” I uttered.

I smiled as I quietly put the pictures away. When they returned to their conversation, I took a long look at the photographs, squeezed them and threw them into the refuse bin.

As I watched the coffin lowered to the ground some weeks later, it became clear that my father had died with the answers to my questions. It infuriated me that I couldn’t put him on the stand and tell him how much I regretted having him as a father. I turned my face away sharply as I struggled with the voice that kept ringing Matthew 6: 15 in my head. My eyes caught a glimpse of Nurse Sarah. She was standing some steps away from me. Her hands were folded, her eyes cold. For a minute, our eyes locked. I whispered to my husband. We turned towards the direction where I had seen her few seconds ago. She was gone. I never set my eyes on her after that day.

Mum has begun to pick up the pieces. First, she called for an emergency Women’s meeting and apologised for her high-class deceit- lies about my father taking her to dinner every weekend, about his daily declaration of love to her, and how he’d never raised his hand on her.

Now she runs the Christian Center For Abused Victims where lots of women and young girls flood in weekly. The center sees committed legal advisers, psychiatrists, health workers, a strong prayer network and counsellors. I can’t forget Mum’s words at the 10th anniversary of the Center.

“Dark secrets block out the healing process for every Lady faced with abuse of any kind. Seeking help is the first step into freedom and that’s part of what this center offers. Can you see that the Sun of righteousness has arisen with healing in His wings? Let Him touch your wounded soul and lead you to victory today.”

That night after the burial, the moment we stepped into the house, I hugged my husband tight. He chuckled. I gazed into his face. “I love you.”

He swallowed hard. I led him to the bedroom.