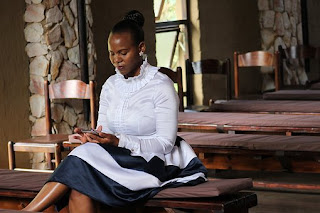 “What do you think.”

Shade hissed and hurriedly pulled off the gown. We are in the inner room of Tamaco’s bridal store.

“What you are doing is unfair. Why can’t you put your greviances aside and be happy for me.”

I tried to smile. A very plastic smile at that.

“How else do I convince you that Jide is a changed man. He is different now.”

I sat on the white plastic chair facing the mirror and crossed my legs.

“Have you considered any of the other guys like Shola, Israel, and which one again?”

Shade’s eyes glinted angrily as she stood behind me. From the mirror, I watched her expression closely. Maybe she would give my suggestion a thought. Maybe there was a flicker of hope.

“I don’t care if Jide does not fit into your idea of a real man. I love Jide and that’s what matters.”

Shade marches out of the inner room. I sighed quietly and for several minutes I sat there, pondering, afraid and disturbed.

That evening I exposed the forbidden secret. I narrated Jide’s involvement in the High rangers, a cult organised by the devil himself. Because how else would the initiation ceremony require a man to drink from a glass cup, a mixture of his blood and the blood of the Highranger’s Director-General.

Jide’s siblings had died mysteriously and it was only Bukky who had miraculously survived an attack after a three day deliverance session. His father had gone ahead to marry another wife and she had given him four boys. One was an imbecile, the other a cripple and the third suddenly went missing. The woman had grabbed her last child and disappeared into thin air.

“If her mind is made up, there is really nothing else you can do apart from prayerfully telling her the truth.” Chuks said.

“I’m so confused.” I placed my hands on my chin.

We sat in silence at the veranda of my house, watching the trees sway in the wind.

My phone beeped. A text message.

I sat straight when my eyes caught the name of the sender.

I couldn’t sleep that night. Why would Bukky want to see me urgently? What has gone wrong? I became restless.

I turned to face my sister. She put the book she was reading away and stared at me. “You want to talk?”

I smiled. “What are you reading.”

Shade eyes brightened. “I’m trying to do a little research on branding. I’m taking my business to the next level.”

Her laughter made me giggle. At that moment I was determined to tell her everything I’ve heard about Jide, after my meeting with Bukky.

I went downstairs to the living room. My parents had travelled the previous day and so we were the only occupants in the house.

I knelt down and I prayed. I didn’t stop the tears. It ran down as my lips muttered words, inexpressible words.

I drove Mum’s KIA into the parking lot of FSC Eatery. Bukky was standing by the entrance. Her face looked tense or was I just imagining it?

We walked in together and picked a spot at the rear. No pleasantries.

“You have to stop Shade from going ahead with the wedding plans.”

“She has to run away from him. Let her go to Cynthia’s place or anywhere outside the city. She must leave.”

My heart thumped. “Bukky what are you talking about?”

Bukky covered her face with her hands.

“I have an idea. Why not convince Jide to stay away from my sister?”

Bukky shook her head. “None of the girls Jide screwed kept their babies. They evacuated them before Jide could stop them. Only your sister did. The promotion exercise is just few months away and my brother needs a sacrifice badly.”

I drew closer to Bukky. “Please can you come out plainly?”

Bukky turned her face away. I tapped my feet quietly without taking my eyes away from her. When Bukky would face me again, her eyes glistened with tears.

“I overhead Jide talking about the sacrifice for the promotion. It’s David.”

I jumped to my feet.

I drove like a mad man. My nephew was never going to used as a sacrifice. No way was that going to happen.

I stepped out of the car and raced inside. Shade was packing some clothes into a small box.

“I’ll be spending some days with Jide. I promise I’ll-”

I didn’t allow her finish before I exploded. I told her everything.

Shade laughed. “How could you believe all that. Jide cannot kill his son and for goodness sake, what’s this about Highrangers. I’m curious to know who gave you this information.”

I nodded. “We just had a private meeting few minutes ago. I’ve known about his involvement in this secret cult right after he dumped you. And that is why I have not been in support of your wedding.”

‘I am going to confront him with this.” Shade marches out but I blocked her path at the entrance.

“What do you think he’ll do? Are you expecting him to just accept this?”

My eyes searched the room. “Where is your son?”

“In Jide’s house. I have been there since morning. I just came back to pick a few things. Jide promised to pick me up this afternoon. I guess he is the one at the door.”

I sat down. “How could you leave David with Jide.”

Shade folded her hands. “I’ll feign knowledge of this, and by tomorrow morning, l’ll find a way to return back home with David. I just hope all you’ve said is true.

Shade hugged me. “Pray for me. I’ll see you tomorrow.”

Jide looked calm and gentle as my sister approached him. He held her hand and spoke softly to her ears as they walked back to his car.

She will be back tomorrow, I thought.

But I was wrong.

Watch out for Episode 6