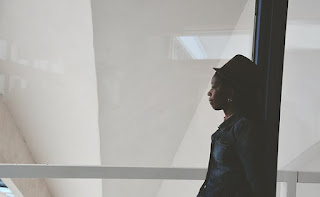 The man pushed Chuks to the concrete floor. Chuks fell forward, gasping for air. He began to cough loudly.

I remained still. What if the gun pointed at my head suddenly blew off?

My heart thumped with fear.

“Put the gun down.” The dark complexioned man ordered.

I took a quick glance at the boy with the gun. What on earth was he doing here? He couldn’t be more than fifteen.

Chuks rubbed his neck and dragged himself towards the wall. He reclined against it and fixed his gaze at me. The captors stood in the center of the room, their eyes inspecting us critically.

“Who sent you?” The dark man asked, in a deep baritone voice.

I hesitated.“I received a call from my friend, that my sister-.”

“Liar!” the boy shouted. “You are government spies.”

I stared at the handsome boy with dark wavy hair. His attractive features had no resemblance to that of a criminal. I loved his brows. They were neatly shaped.

“Listen, The judge will be reading out the sentence on four of our men tomorrow. So you had better start talking now. If that sentence doesn’t go well, you both are dead.”

He pulled out a bottle of beer from the wooden cupboard that stood beside the window. He popped it open and ran the content down his throat in one gulp.

He threw the bottle against the wall. The shattering sound made me cringe. “Your time starts now.”

I shot a quick ‘what are we going to do’ glance at Chuks. He looked away. I knew he was thinking of what next to do.

Suddenly, Chuks stood up. The man stood up too. The boy grabbed the gun quickly.

Chuks faced the boy. “What are you doing here? How old are you?”

The boy frowned. “Thirteen. But I’m strong enough to blow your head off.” He pressed the gun to Chuks temple. I jumped to my feet. The other man took the gun from the boy as he peered closely at Chuks.

“We need to find her sister now!”

“Who are you to give us orders?” The boy said, with a sneer on his face.

Chuks grabbed my hand and headed straight for the door.

Chuks stopped but he didn’t turn. The man stood in front of him, his eyes brightened.

“Chuks!” He repeated. He hugged him firmly, laughing at the same time.

Chuks frowned. “Lekan help me find this lady and let’s get out of here.”

I have never seen a man exude such confidence. Chuks became the boss as he led the search. We seached everywhere, including the ‘forest’ behind the building. Shade was nowhere to be found.

What’s going on? Why would Bukky lie to me.

We rushed over to the pawpaw tree where the young boy stood with arms akimbo. My pregnant sister was sitting below the tree staring into space. I squatted in front of her. “Shade.”

She looked at me. No smile. No recognition.

What has Jide done to my sister?

I was crying as I held her hand and we returned to the building, I hugged her again. I wanted her to recognize me. I wanted to tell her she would be fine. That I would never let her out of my sight again.

Her eyes darted from one person to the other.

She didn’t say a word.

“You have to leave now. The others will soon be back.” Lekan said as we stood by the passage.

“Come with us.” Chuks pleaded.

Lekan shook his head. “No I can’t.Please take Segun.He is your blood. He deserves a better life. I’m sure  Amarachi would be glad to know he is safe with you.”

Chuks looked from Lekan to the teenage boy.

“What are you talking about.”

Lekan sighed. “Shortly after you left lagos, your sister had a son for Bayo. He was seven when she ran away to Italy. I didn’t know you’ll ever return to Lagos.

“But she never told me she had a child. Where is Bayo?”

Chuks walked over to the boy and touched his face. Segun pushed his hand away.

“You can’t take me away from here. This is where I belong.”

Lekan held his face with his strong hands. “Remember your father’s words. Segun, he begged you to leave this place.”

Segun began to cry. My sister placed her hands on his shoulders. I just stood there, speechless.

“You have to get out of here fast.”

We walked slowly out of the building. Chuks tried to convince Lekan again but he refused. We entered the car and Chuks turned the ignition on. I stared at Lekan as he stood in front of the building. His eyes were red.

“Stop.” I said just as the car began to move. I jumped out and ran to Lekan. I pulled him towards the car. It was rather surprising that he didn’t resist. I settled him comfortably beside Chuks and returned to my place beside my sister.

We were just few blocks away when I turned to see a red Jeep stop in front of the uncompleted building. I tapped Lekan quickly. Four heavily muscled men jumped out of the jeep, the fifth held a large briefcase and they all walked into the building.
Two black vans sped past us and stopped in front of the uncompleted building. Men dressed in black jumped out. Segun’s face went white. Chuks pulled the car beside another uncompleted building. We remained seated and watched the policemen take positions.
Rapid gunfire.
“Let’s get out of here!” I screamed. Nobody answered me. Their heads were all turned backward, towards the building.
Two policemen went down. The four men rushed out, shooting sporadically as they searched for a hideout. But they were outnumbered.
One by one, they fell. Dead gentlemen of the highway.
Segun cried till we approached the black gate that led to the duplex where I resided with my parents. Lekan kept muttering, ‘Thank you Jesus.’ It was during the journey home that I discovered he was an ex-convict with a great sense of humor.
Mum shouted for joy the moment we entered the house with Shade. Dad rushed downstairs, his mouth opened as he stared at his daughter. The cook and housekeeper also rushed out of their duty posts. Songs of praises rang high and loud.
Shade placed her hand on her protruding stomach and stared at us awkwardly, like we were aliens with lizard shaped faces and frog-like lips. She didn’t say a word.
“Shade, It’s Mum.” My mother said, her eyes brimmed with tears.
Shade just stared.
“She’s going to be fine.” Chuks whispered.
*****
Episode 8 comes shortly.