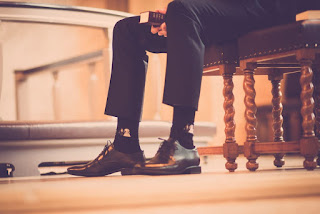 They gave me one reason why I should marry him. But I discovered five reasons why I shouldn’t. I ran back to them, the three women pastors in my church-Mrs Thompson, Mrs Ochukwu and Mrs Adegbite- and submitted the five reasons why the relationship must end. They gaped at me pathetically, shook their head and in a soft and firm tone reminded me that my wedding was just two weeks away.

They said marriage comes with a cross, bearing its pros and cons.

It was a gloomy Saturday morning. I and Dad had just stepped into the church when I sighted Bimbo, Jessica and Bola.

What are they doing here? I muttered. I hate to be reminded of Harvey Guest House. Room 30.

From beneath the veil, I have a blurred view of the crowd that have decided to grace the occasion- the exchange of my vows with the Pastor’s son.

I’m 33 for goodness sake. I’m too old to start all over. By the way, who would be interested in a podgy woman with a round face and large bug-eyes.

“I’m asking you for the last time. Are you sure you want to do this?” Dad whispered.

I did not respond. Dad stopped.

I answered quickly. “Yes Dad. Can we keep moving please?”

Fear gripped me as I saw Alex stand on the altar, unperturbed and harmless. Of course, he is a fine-looking gentleman except that the fineness doesn’t glide down to his heart.

“Who gives this woman to be married to this man?” The Pastor’s voice thundered in the same rhythm as my heart beat. The moment had come.

“I do.” My father said. Pastor Badmus, the assistant regional Pastor beckoned on us. Slowly I was led to the altar. Dad withdrew his hands from mine. For the first time, I felt alone.

He cleared his throat. “We-“

“No! I won’t allow this to happen. She has a right to know.” A shrill voice rang out. I turned towards the direction of the voice. Alex mother was running towards me. Quickly I lifted the veil from my face. My father was already on his feet.

The face of Alex Father, a.k.a The senior Pastor, was dark with rage. He was running after her.

“Are you out of your mind woman!” he shouted and grabbed her hand

For one slight moment, I see an inconspicuous resemblance between father and son.

“Let me go.” She pulled away. “Look at what you’ve done to my son. All these years you’ve been covering up his sins. When I try to correct him, you beat me up and tell me I’m a barren woman who cannot give you more children. Now-”

He signaled to two ushers. “Take her out of here.”

They pulled her two hands gently. With eyes covered in tears, she obediently followed them.

Alex Father faced the crowd. “I apologize for my wife’s despicable behaviour. She is suffering from mental exhaustion.

Did I just see tears in Alex’s eyes? I peered at him closely.

‘Can we continue now?” Pastor Badmus eyes bored into mine. I understood the unspoken words. He wanted the veil back in place.

“Not yet.” I said, quietly. I moved closer to Alex

The Senior Pastor marched to the pulpit. “This ceremony has been postponed till further notice. Can-”

He was still speaking when pandemonium broke out. I couldn’t hear clearly what he was saying over the hubbub. People had begun to form groups at different corners and I saw a group of women-the ‘amebo’ women association- rush towards us. My father and my stepmother were standing beside me. We are shrouded by a large crowd. The Pastor disappeared out of sight.

Alex stared at me. “I’m sorry I’m just telling you this.” His lips were trembling. For the first time I pitied him. “I’ve been diagnosed with HIV.”

I fainted.
*******
I wept all through the night. The truth was clear, my days were numbered.

Again, I’m reminded of Harvey Guest house. Room 30. The day Alex led me into a room, after convincing me that I needed to see something important. I knew the guest house belonged to his uncle and besides I trusted Alex. He was Christian enough not to try anything funny. He knew my stand and respected it. But I was so wrong because that day he locked the door after I entered the room. I turned swiftly. As he stood before me, I saw a self-satisfying smirk on his face.

“Or what do you want to show me?” he said, chuckling. I stared at him puzzled.

He led me to a table. On the table were pictures spread out. I recognized Bola, Jessica and Bimbo but the other faces were unfamiliar. From behind, he wrapped his hands around my waist and whispered. “None of them gave me a hard time and I am hoping you wouldn’t too.”

He turned me around. I was facing him now.I could see his eyes burning with lust. Is this Alex? He began to unbutton my shirt. I pushed him and ran to the door. It was locked.

This is not happening. I have vowed to remain chaste till my wedding night.

I shrank back against the wall as he approached me.He dragged me to bed. I began to scream. He slapped me hard. He tore my shirt as I struggled beneath him. Then he raped me.

“Jesus, Funke why didn’t you tell me this?” My father said, after I had narrated my ordeal with Alex.

“And you wanted to walk down the aisle with him? I didn’t train a stupid daughter for goodness sake.”

Tears ran down my face. “I can’t believe I’m going to die soon. This was not what I planned for my future.”

My step mother smacked me up. “Stop talking like that! He might have contacted the disease after that day.”

*****
Doctor Femi, my father’s best friend, pored over my test result. We were in his office, six pairs of eyes boring into his and waiting impatiently for the big blow. He looked up. His face read sadness. Then he stood up and approached me. The tears returned as I got up. My father bowed his head. My step mother held my hands.

I was startled. My father snatched the paper from the Doctor and studied it carefully. He turned to me.

“I don’t care whether you have a job here. You are going to pack your things and follow us to Lagos tomorrow morning.”

Thank you Jesus, I muttered continuously as I ran out of the doctor’s office. I am never going to think of marriage for the rest of my life, I thought.

I looked up. Jerry, a friend from church, was standing in front of me.

“It’s negative.” I cried out, excitedly.

Jerry grinned. He held my hands and gazed into my eyes. “Funke, We are going to get through this phrase together.”

“I’ll be here to give you all the support you need.”

I nodded. The trio-My father, my step mother and Doctor Femi-were talking and laughing as they came out of the office.

“I have to go attend to some patients ok? I’ll give you a call.” Jerry said. I watched him walk away.

We are going to get through this phase together, I thought again as Dad drove out of the hospital.

The next day as we got set to leave for Lagos, the news reached us. Alex had been found dead in his bathroom with a gun in his hand.