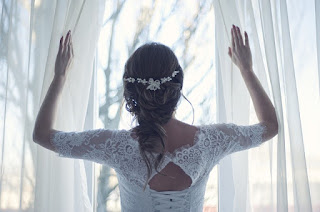 The moment I sighted the three women chatting behind the church auditorium, I immediately wished the ground could open up and swallow me up.

When Elder Ajayi’s wife had called the previous night to inform me of our meeting after the church service, I never envisaged seeing three women. How would I face these women who were looking ready to pounce on me?

Should I just turn back quickly and run home? If she called, I’d say I was ill. It wasn’t exactly a lie. I had a slight headache. One thing was clear: I had to flee for my life.

I made to hide behind the Pastor’s landrover when one of the women raised the head and pointed in my direction. They were all staring at me.

Sumbo, you’ll get through this. Relax. Be confident, I whispered to myself and walked gently towards the women.

Jesus, can’t you ask the angels to blow the trumpet?

I kept walking until I stopped in front of them.

For a second, I stared at the chair right in front of the women.

Sumbo, let’s do this, I muttered and sat, my back straight.

‘How old are you?’ One of the women whom we referred to as Iya Ibeji had her eyes fixed on me while her hands worked on her gele.

‘Where is Funmi and Labake?’ Sis Ajayi asked, biting out of a green garden egg.

Now I was confused. What had my friends got to do with this discussion.  ‘In their house, I guess.’

‘Which house. Their parent’s house or their husband’s house?’

I stared at the floor and said nothing.

Iya Ibeji leaned forward, the strong odour oozing from her armpit almost choked me.  ‘You are a civil servant right?’

‘Do you want to use your pension to take care of your children? Is it when you retire that you will be running from pillar to post looking for money for WAEC and NECO for your children?’

‘That’s if she will even have children.’ the third woman spoke for the first time. ‘Don’t get me wrong o. I’m not saying God can’t do it but you know the thing about menopause.’

‘Sumbo, agba nde ooo. You are not getting younger anymore. We love you that’s why we are telling you this. Hold Kayode very well. See, all these other brothers that you think may be interested in you, don’t deceive yourself o, their eyes dey chuk for young young sisters. All those 22, 23 year old girls.’

Tears strung my eyes. ‘I was not at peace with Kayode that’s why I broke up with him. Besides, He is not even interested in the relationship.’

Iya beji moved her chair closer. ‘Who told you so. Leave those small small things you are complaining about. I have been married for fifteen years. I know what I’m saying. Go and apologize to him. Settle your differences. That is your place as a wise woman. ‘

‘If it means rolling on the ground, do it. Let him see how repentant you are.’

Why was I different from my friends? Why can’t things work for me smoothly. Who did I offend? I have given myself to God’s service, why would God allow me suffer like this.

A hand touched my shoulder. I quickly adjusted and wiped my tears with the back of my hands.

I nodded and raised my head to see Ranti in a white shirt and grey suit. Because I was very short, I had to strain my neck just to look at his face.

Normally I would have objected, but this time, I didn’t. I followed him to his car and we drove in silence.

That night I apologized to Kayode and all he could say was, ‘Apology accepted.’ Why was I sticking out with a man who was so full of himself?

Bisola, my roommate was furious when I told her I was back with Kayode and our wedding plans would kick off soon.

‘What is wrong with you? Sumbo, for God’s sake, how can you still think of going back to a man that treats you like a piece of shit. I’d rather remain single than live with a man who thinks he is doing me a favour by marrying me.’

The way Bisola paced the room made me wonder why she was so agitated about this.

‘Sumbo, you are making a great mistake. You don’t deserve that useless stupid man.’

Bisola exhaled and raised her hand. ‘Fine. But how do I prove to you that you are going to regret your decision. Sumbo, you are beautiful. You are a good woman. I’ve lived with you for a year now and if I had a brother, I’d have forced him to marry you.’

‘Sumbo, please have a rethink. Did you pray about this? What of Bro Ranti? I heard he has been making some moves but had to stop when he heard you were with that godforsaken son of a-‘

‘Enough! I will not have you insult my finacé. We all have our flaws and understanding is what we need to live with each other.’

My phone rang. I got up from the bed. ‘Excuse me, I need to speak to my fiancé.’ With that, I walked out of the room and slammed the door.

But that night, I was restless. The peace I thought I had regained after Kayode said those sweet words that I loved to hear, disappeared. I sat on the bathroom floor with my Bible on my laps. I began to cry again.

‘Jesus, I am confused. Please help me. You said if I walk in your light, I will not stumble. Open my eyes Lord. Clear this confusion. Jesus help me.’

I didn’t know when I slept off on that floor, but when I would wake up, I had the same request on my lips. I repeated them out loud again.

Two weeks had passed when one evening, Bisola dragged me to Kayode’s house. I watched her rummage her bag for a key which she slut into the keyhole. How did she get the key to Kay’s house? Before I could ask, she pulled me in and led me behind the sofa and then pushed my head down.

‘What’s going on?’ I asked, raising my head. She pushed my head back just as her phone rang.

‘Sumbo, You need to see something. Just stay quiet please.’

I obeyed, listening to Bisola’s conversation on the phone. Could that be Kay she was talking to?

‘You have a lot of explanation to do.’ I said, from my crouching position after she ended the call.

‘Trust me. I know what I’m doing. Now be quiet, I can hear footsteps.’

The door opened. Someone entered. The door click shut and the lock turned twice.

‘Smart girl. Turn around and let me see the full content of what I have missed.’

Slowly I peered from my hidden position watching as Kayode flung his Bible to a stool and pulled my friend into a warm embrace. I blinked twice when his shirt came off  and he began to pull down his trousers.

Bisola stopped him. ‘Relax guy. Not too fast.’

‘Which one is not too fast. You starved me for two months and you expect me to slow down. Babe now, I’ve missed your body. I think of it every night. You know, I still have to return to the church to take the closing prayer.’

He moved her towards the wall but she stopped him again. ‘Condom.’

‘Oh…yeah. I still have some in the wardrobe.’

As he made to go into the room, she held his hand. ‘Turn around. There is a condom on the table.’

Kayode froze as he turned to find me standing behind the sofa, speechless. He looked from me to Bisola and back to me.

Bisola hissed, her gaze fixed on me. ‘I don’t understand how you explain this your will of God thing. I’m not in your born again gang but I don’t think God will ever give you this kind of infidel for a husband. Sumbo, you are a good woman. You deserve the best. ‘

With that, she walked out of the house. Kayode approached me. It took me so much restraint not to slap him.

He cleared his throat. ‘I think it’s best we keep this to ourselves. Our wedding is fast approaching and we will not want anything to taint it.’ I stood glaring at him, the love I had dissipated, replaced with something new. Disgust.

‘Stop looking at me like you are perfect. I am a man. These things happen. This was going to be the last time I would do such before our wedding night.’

He touched my shoulder. ‘I got something for you.’

He rushed into the room and I marched out of the house. At the door, I stood for some seconds.

Thank you Jesus, I muttered and ran down the stairs before flagging down a cab that took me back to the church.

******
The name of the Lord is a strong tower, the righteous runneth into it and is safe..

….Now I know that the Lord saveth his anointeth, He will hear him from his Holy heaven  with the saving strength of his right hand.

The Lord listens to our prayers. He is the best solution for every confusion that has set into our lives. He knows the intent of the heart of every man. We can only see beyond our nostrils but He sees into the future. We can rely on Him to lead and instruct us as we go through life.

There are some mistakes that are costly….to prevent those, we should trust and listen to Him. In Christ, the veil is removed.