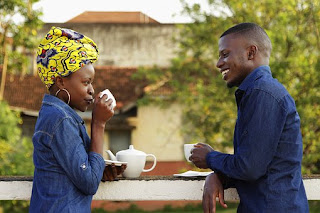 It was at Dara’s 25th birthday ceremony that Yetunde first met Charles. Something in his eyes pricked her soft flesh and caused a strong desire that she couldn’t deny. Apart from his striking features, she loved the way he moved his body to the sound of the ‘morire’ song. He was free spirited, full of life, something she lacked but craved for.

She didn’t expect him to glance her way where she sat, perched on a stool, far away from the dancing floor. But he saw her and his eyes stayed and he smiled. Embarrassed, she looked away, overwhelmed by the excitement of being noticed.

It was time to take photographs. From the side of her face, she watched him quickly tuck himself between her and a pot bellied man as they faced the photographer. That made it difficult to concentrate. She could smell his breath, a sweet  smell from his Cologne that wafted the air.

She was ready to disappear out of sight when he blocked her path. When she raised her eyes to meet his, she noticed for the first time his dark eyebrows against his very fair skin.

‘I am Charles.’ He stretched out his hand.

‘Yetunde’ she shook it.

Yetunde chuckled. ‘Do people still use that line?’

‘I’m serious. I know this face.’ He moved his head from side to side slowly, his eyes turned upward. Yetunde folded her hands and smiled.

‘Are you a member of the drama team in Dara’s church?’

Yetunde threw her head backwards. ‘How did you know?’

He grinned. ‘You staged a play in my church two weeks ago?.’

Charles nodded. ‘Yes. Your ministration was powerful. I really enjoyed it. I was the one who helped you arrange the chairs on the stage.

Yetunde laughed. ‘That was you?’

Charles nodded again and led her away from the noise. They found two empty seats and soon they were laughing and giggling.

‘It seemed like I have known you for years.’

Yetunde smiled. ‘Same here. You are such an interesting person.’

Before she got home that evening, Charles had called twice.

Yetunde couldn’t get off the phone until two am and that was only because her battery had run down.

Even when her phone battery died, she still couldn’t sleep. There was this joy bubbling in her heart that drove sleep far away. All kind of images filled her head. Her, standing on the altar making vows to Charles, Charles whisking her into the hotel room the night of her wedding, the cuddles, the sweet romantic words, the eagerness to see him return from work to taste her delicious meals.

It was 4a.m by the time sleep would take Yetunde to the dreamworld that saw more of Charles and beautiful ecstatic moments and had Charles not called that morning, she wouldn’t have made it to work in time for the parent teachers conference.

‘I’ve never felt with anyone the way I feel for you. I don’t know how you do it. I feel so happy and fulfilled. I love you.’

‘I love you too.’ Yetunde responded in a soft voice, her body rolled into a ball on her tiny mattress.

The glow on Yetunde’s face was obvious to everyone around her. She worked with so much speed and it was normal to hear her whisper this to her friends. ‘Charles is the best gift from God. He is everything I want in a man.’

But things began to turn sour few months later when the arguments started.

‘Why do you like drama so much. Can’t you go for something more serious like Bible study or join the prayer team?’

‘Why would you say that? This is my call, my ministry for goodness sake!’

‘You are wrong. We evangelise. Charles this is my passion. I love to act.’

As if a veil was dropped from Yetunde’s eyes, she began to see Charles for who he was. The man who adored her suddenly got angry at every little issue, he would go into moods and not talk to her for days until she apologized, his eyebrows weren’t as fine as she thought, and for the first time, she noticed his legs that were slightly bowed.

Why didn’t I see this coming? Yetunde lamented.

Six months into the relationship, Charles took Yetunde to visit his mother. Yetunde got the coldest of welcomes she had received in her life. As they drove out of the compound after the visit, Dare turned to her.

‘Why do you use jewelry? Is it really necessary? You are beautiful without these things, don’t you think so?

Yetunde stared at him and shook her head. ‘Are you just seeing me for the first time!’

‘Why are you upset? I just asked a simple question.’

Charles hesitated. ‘she doesn’t but she will if you let go of the earrings and necklaces and if your skirt can be a little longer.’

Yetunde exhaled. ‘What have I got myself into?’

‘Listen, I don’t have issue with the way you look, it’s just that my mum-‘

‘Forget it. This relationship seem to be heading nowhere.’

‘I agree. I think we should just call it quit and go our separate ways. Maybe this is God saying No.’

The words struck Yetunde’s heart so hard that it made her lips shiver. She glared at him. ‘You can’t even fight to see this work? When you said you loved me, you were pulling a joke on me right? How could you not mean those words? Just like that you want to break up with me!’

Charles pulled the car to the side of the road.  ‘Look, life happens okay? What do you want me to do now?’

That evening, Charles bounced into Grace Tabernacle Assembly in time for the choir rehearsals. He stayed close to the entrance and fixed his gaze on the tall slender lady leading the choir in her beautiful voice. He smiled and waved when her eyes found his.

‘ God, the way I feel for this lady, it’s so deep and strong. She is so perfect for me. I know this is you speaking. I just know.’ He sighed. ‘Let this work oh Lord. Let this be my final bus stop.’

He rubbed his hands together and walked back to his car to wait.

This just has to be the one. She is the one….

Being in love is not a sufficient foundation on which to build a successful marriage.

Feelings. Emotional outbursts. Tingles. a.k.a being in love or falling in love.

I see these feelings of being in love as the icing to a well made cake. You know the way between a man and the woman he is attracted to,  the enthralling moments of ‘love’, the glances from those lovely eyes that sends desire reeling, the romantic words, the giggles and chuckles, the charming personality. Yeah those are the icing. Don’t get me wrong, they are important too. But I’ve learnt that we cannot hold on to them as determinants of a beautiful marriage. Because feelings are unpredictable.

It’s easy to say heaven and earth when those feelings are strong, but when the euphoria dissipates, what’s going to be left of the relationship? This is where the true test comes in. The strength of a relationship is not determined in the first few weeks when you can’t think or coordinate your thoughts. When issues of finance, values, spiritual intimacy have not come to the limelight. When It’s like your world has just stopped, because Prince charming has arrived.

How many times have you come before God seeking to know His mind concerning a brother but along you drag those tingles and the warm bubbling feelings and you come out of your prayer room with scriptures that prove that He is the one but later you wonder, ‘did God really speak?’

Feelings, as wonderful as they may be, if not controlled can make us blab nonsense like a man ready to sign over his house for five minutes of sex.

Commitment. Compatibility. Values. Tolerance. Sacrifice are the ingredients for that cake you are baking.

Beautiful partners in a relationship that finally leads to marriage know that there are days they won’t feel like living with the other person, that there are ladies they will meet that will be prettier than the ladies they’ve made a promise to spend their lives with, that more intelligent and cute guys will ask them out, that there will be days when boredom will set in, that it is commitment that will keep the relationship going, that it takes work and understanding and tolerance and sacrifice to maintain a beautiful relationship.

We need the icing yes, but what’s icing to a half baked cake.